Not all of the parts that got edited out of Full Coverage were cut because they were bad. In this Deleted Scene, we will go over a scene that was cut to improve pacing and to change when a character introduction happened. There will be some mild spoilers involved in describing this scene, so if you haven’t read Full Coverage: An Action Comedy yet, please go and check it out on Kindle or paperback on Amazon first and then come back here.

This scene is from the last third of Chapter 2 in Rev 07 of the book. This was the first full version I sent to my awesome editor for her to read over in May of 2016. The final version of the book is Rev 10 and the text for that was finished in March 2017. This scene would take place right after Chapter 5 in the final book, but as you are about to see, the timeline this scene existed in is very different from the final book.

END_OF_DOCUMENT_TOKEN_TO_BE_REPLACED

One of the fun parts about self-publishing your own book is making your own cover art! I’ve dabbled in artsy stuff my whole life and my books are a fun way to go from amateur to semi-pro artist once in a while. The Full Coverage cover art changed pretty dramatically over the 6 months I was working on it. Below you can see a gallery of the evolution of the cover and if you click on each thumbnail you’ll see more info about each one. Enjoy!

2015-10-31: My first of three hand drawn concept covers that I used for my first beta test. The First Aid cross and cheeseburger wound up coming back. 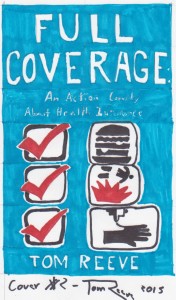 2015-10-31: Initially I was trying to describe events in the book with icons, but these are really hard to see as thumbnails. 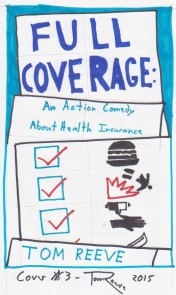 2015-10-31: The “Insurance Forms” cover that I originally though would be what I was going for. It makes things really busy though and it doesn’t show up well as a thumbnail.

2015-11-03: My first attempt at using Inkscape to make the cover. The cheeseburgers are in, but the font is still just standard built in windows fonts.

2015-11-03: The red color scheme finally appears! Still looks like a Powerpoint deck with those standard fonts though. 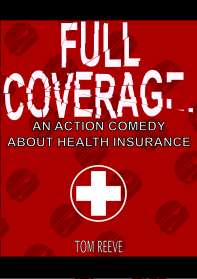 2015-11-03: My first attempt at customized text and the First Aid cross makes a comeback. Due to my bad splicing skills in Inkscape the E is cut off, but this is still an early draft. 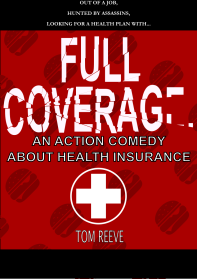 2015-11-03: Trying out letterbox view on a book cover? My copy of The Moon is a Harsh Mistress does this, but it doesn’t really work here. 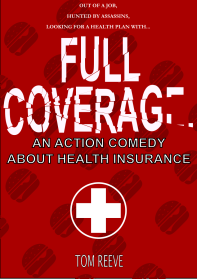 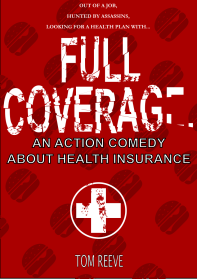 2015-11-03: I actually kinda like this inverted color look. Maybe I’ll bring it back for a special edition or Full Coverage 5: Blood on the Snow.

2016-05-14: I figure out the “extrude” tool in Inkscape and come up with suitably dramatic text for my cover. Now you can read it as a thumbnail. This is also where I switched from a clip art cheesburger to my own double decker creation. 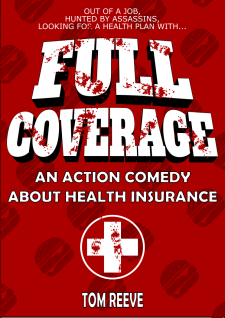 2016-05-16: I find a splatter font and some other blood splatter brushes and the final blood pattern is added.

2017-03-19: I remove the “About Health Insurance” subtext to try and not scare people off from reading the book. This is the final cover!

In my early drafts of Full Coverage (before meeting my awesome editor!) I fell into the same trap that many indie writers do. I described things in way too much detail and let the world building kill the pacing and drag the story down. In this Deleted Scene, we will go over one of the most egregious instances of this and what I did to fix it. There will be some mild spoilers involved in describing this scene so if you haven’t read Full Coverage: An Action Comedy yet, please go and check it out on Kindle or Paperback on Amazon first and then come back here.

When I was first outlining Full Coverage, my original idea was to make Kyle a total asshole in order to show how when compared to an insurance company even a total asshole like Kyle seemed like a good guy. This was not a good idea. Writing a book filled with nothing but self-centered assholes isn’t very fun and it wouldn’t have been fun to read either. It’s like watching a sporting event between two teams you hate. The only thing you can root for are injuries and maybe a meteor.

This led me to put a note in my OneNote outline sheet saying: Error on the side of FUN. If it isn’t fun to write it won’t be FUN to READ!

Even with this new focus on making things fun, my early readers consistently told me that I needed to make Kyle more likable. While doing some research on how to do that, I found this article called: Of Assholes and Antiheroes: Morality in ‘Borderlands 2 over at popmatters. It’s a really neat analysis comparing Max Payne (antihero), Kratos (asshole), the Vault Hunters (antiheros) and Handsome Jack (asshole). Sure it’s about video games and not books, but the idea is the same. END_OF_DOCUMENT_TOKEN_TO_BE_REPLACED

My awesome editor just published a book on writing with different narrative points of view and two snippets from Full Coverage made it in as examples of third person omniscient narration, woohoo!

Over the course of writing Full Coverage, I wound up cutting out a lot of stuff that didn’t work. Now that the book is out I thought it would be fun to do some “deleted scenes” posts to take a look at what got cut out and why. There will be some mild spoilers involved in describing this scene so if you haven’t read Full Coverage: An Action Comedy yet, please go and check it out on Kindle or Paperback on Amazon first and then come back here.

In this scene Kyle goes to a PrintStop, a futuristic version of Kinko’s that has 3D printers in it, to print out the parts for his silenced pistol and some knives for the hit he is about to do. While he’s there a couple of Latin ninjas ambush him. They then fight it out, pulling freshly printed weapons out of the printers as they try to kill each other. Sounds like it should be awesome right? It wasn’t. This chapter was universally disliked by all the people who read that draft of the book. END_OF_DOCUMENT_TOKEN_TO_BE_REPLACED

It’s been a little over a month since Full Coverage: An Action Comedy launched so I thought it would be fun to take a look at how well my first attempt at self-publishing a book went. Here are the overall totals between launch on 4/1 and today 5/9:

Full Coverage is 234 “Kindle Standard Equivalent” pages long so that 2,402 pages read means that 10.26 people (2,402/234) read it on Kindle Unlimited. Why the 0.26? Because Kindle Unlimited only pays authors for pages read, and a few people started it without finishing the whole book.

That gives me 57 readers total in the first month, sweet! END_OF_DOCUMENT_TOKEN_TO_BE_REPLACED

When Full Coverage first went on sale on April 1st I started running Facebook ads using the ad below. Let’s call this Ad # 1.

END_OF_DOCUMENT_TOKEN_TO_BE_REPLACED

Full Coverage: An Action Comedy is now available for Kindle on Amazon! The Kindle ebook is only $0.99 until 4/8. If you like it, please leave me a review. I just approved the paperback proof so it should show up sometime next week.

Full Coverage: An Action Comedy is now available for pre-order on Amazon! The Kindle ebook will go live on 4/1 and is only $0.99 until 4/8. The paperback should follow a week or so after that. If you like it, please leave a review for me.