When I was first outlining Full Coverage, my original idea was to make Kyle a total asshole in order to show how when compared to an insurance company even a total asshole like Kyle seemed like a good guy. This was not a good idea. Writing a book filled with nothing but self-centered assholes isn’t very fun and it wouldn’t have been fun to read either. It’s like watching a sporting event between two teams you hate. The only thing you can root for are injuries and maybe a meteor.

This led me to put a note in my OneNote outline sheet saying: Error on the side of FUN. If it isn’t fun to write it won’t be FUN to READ!

Even with this new focus on making things fun, my early readers consistently told me that I needed to make Kyle more likable. While doing some research on how to do that, I found this article called: Of Assholes and Antiheroes: Morality in ‘Borderlands 2 over at popmatters. It’s a really neat analysis comparing Max Payne (antihero), Kratos (asshole), the Vault Hunters (antiheros) and Handsome Jack (asshole). Sure it’s about video games and not books, but the idea is the same.

In order to change Kyle from an asshole to an antihero, I first needed to make him quirky and make sure that the targets of his violence were somehow justified. The new one sentence description of Kyle became:

Kyle is a cheeseburger obsessed slacker assassin who is out of a job.

This one sentence captures his main quirk (obsession with cheeseburgers), his flaw (slacker), his profession (assassin) and goal (out of a job, so he needs a new one). If you are having trouble defining a character, try to distill them down to a single sentence to capture the core part of them first and then expand from there.

In order to keep the reader rooting for Kyle, he was no longer allowed to shoot innocent bystanders or use them as human shields to save his own ass because that would make him an asshole. However, Kyle could still kill and be a dick to the people trying to kill him since he is an antihero after all.

Additionally, the other part of making readers empathize with a character is by showing your character suffer repeatedly but not give up. Even though Full Coverage is a comedy, Kyle suffers a lot. *** MINOR SPOILER WARNING *** He loses his job, he loses his insurance, women won’t sleep with him, bars/clubs won’t let him in, his body changes, a bunch of his limbs and other body parts are blown off/cut off/crushed/etc. *** END SPOILERS *** This was done on purpose to make the reader empathize with the character and to make it that much sweeter once Kyle fights his way back to the top.

Another good example of this is in this Lessons from the Screenplay video about Independence Day. President Whitmore repeatedly fails and gets his butt kicked the entire movie. That makes it all the better when despite all those failures he still manages to deliver a kick ass speech and go up against the aliens in the last battle of the movie.

The popmatters article is also useful when creating good villains. If you make the villains dicks to the main character in addition to whatever other evil they are doing, it makes it much more satisfying when the hero takes them down.

In Full Coverage, the best example of this is *** SPOILER WARNING *** Trevor. Whereas the other assassins are motivated by money or revenge, Trevor is going after Kyle because he knows he’s in a weakened state and he thinks Kyle will be an easy target to pad his stats with. He takes advantage of Kyle’s situation and goes after him, in the process violating an implied assassin’s code (I really should have put in a narrator joke about him violating the Hitboard terms of service by doing that, doh! Next book!) by going after a person who came in to interview for a job, presumably without his boss’ knowledge. He hacks Kyle’s implants so he can taunt him verbally and spams Kyle’s vision with pop-up ads for farm porn to taunt him through his own eyes. Trevor isn’t just some assassin out to kill Kyle for a buck who keeps things professional. Trevor completely disrespects Kyle and is a total dick to him while he tries to kill him. That makes it very satisfying for the reader when Kyle does finally take him down. *** END SPOILERS ***

A couple of people have told me that this fight felt the most personal/violent out of all the ones in the book, and showing that personal animosity between the characters during it is probably why. 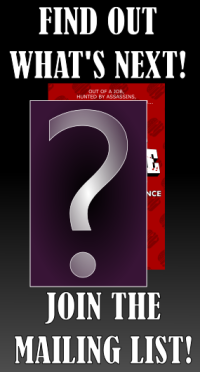