When Full Coverage first went on sale on April 1st I started running Facebook ads using the ad below. Let’s call this Ad # 1.

On mobile, this ad looks like this. Notice how the entire lower subtext is removed from the ad.

I setup my ads using the Facebook Ads Insights tool and generally following most of the advice on this series of Youtube tutorials by Miles Beckler. My interests are all set to scifi and comedy authors who showed up when I searched for them using the Insight tool. After a week I checked out how my ad was doing and it’s performance seemed low to me. Over the course of an entire week only 46 people had clicked on it and I was only getting enough clicks to use around 28% of my ad budget, which I had set to $20 per day max. The gap on April 5th is a day where nobody clicked on my ads.

Curious if I could do better, on April 8th I did some Googling to see if I could find better examples to work with. Using the very generic search phrase “facebook book ads” and looking at just image results, I noticed that a lot of the example ads had questions on them. Things like “Like Mermaids?”, “Love Thrillers with a Supernatural Edge?” popped up.  One of the few times I’ve actually bought something off a Facebook ad was when I saw one for a band called Invocation Array asking if I liked Nightwish and Sci-Fi. I did so I clicked their link and bought their album off Bandcamp. Armed with a questioning state of mind, I created Ad # 2 with the following text and left everything else the same.

On mobile, the bottom subtext is again cut off and it looks like this: 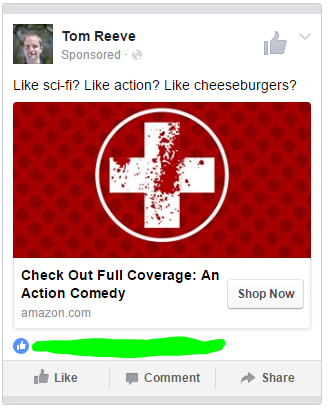 I let both ads run together over the weekend and I checked in on them the evening of Sunday April 9th to see if anything was different. It turned out that Ad # 2 had kicked the crap out of Ad # 1 and gotten more clicks and gone through more Ad Spend in two days than Ad # 1 had over the course of an entire week. All from just changing two lines of text.

Based on these results I disabled Ad # 1 and I’ve been letting just Ad # 2 run since yesterday. It’s starting to level out, though at levels that are a lot better than Ad # 1.

I’ll be checking in on the ad every couple of days to make sure that it keeps doing well, but it looks like I’ve found a winner.

There is one weird difference that I’ve noticed between the ads though, the demographics between them are very different even though the target audience and interests are identical for both of them. Ad # 1 was pretty much an even split between men and women and had something of an inverted bell curve for age distribution.

Ad # 2 on the other hand seems to be going after the older male demographic almost exclusively. I’m not sure what exactly is causing this since the two ads share the exact same target audience settings. Maybe Facebook is picking up on the “sci-fi”, “action” and “cheeseburgers” words in my text and pushing the ads towards dudes? If so, that would seem to indicate that some parts of the ad targeting are beyond my control.

I hope you found this dive into the inner workings of Facebook ads interesting. If you would like to see more stuff like this please let me know. Thanks for reading.